“The juxtaposition of this thoughtful sampling of later Mozart piano works coupled with a kind of lovingly meditative set of performance by Roberta Rust leaves you appreciative and gratifyingly satiated with it all.” — Gapplegate Classical-Modern, Music Review

“The Inside Story” Roberta Rust and A CITY OF SILVER & A CITY OF FIRE is live now on the PARMA blog. Here is the link.

A City of Silver & A City of Fire, Roberta’s latest recording release, has received its first review.

“…artistically compelling and historically noteworthy…Rust rises to the occasion with a balance of energy, precision and lyricism…this album challenges the classical music field to re-examine its habitual conceptualizations of ‘American classical music’ and ask how that canon can more faithfully include the contributions of indigenous artists of the Americas.” — John Dante Prevedini, Classical Music Daily 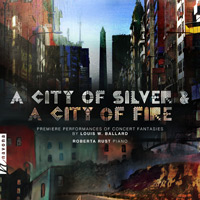 A CITY OF SILVER & A CITY OF FIRE has been released on Parma’s Navona Records - this is a recording of live premiere performances of music by Louis W. Ballard (Quapaw/Cherokee) played by Roberta Rust at Carnegie Recital Hall. Now available on Apple Music, Spotify, Amazon Music, YouTube, and Deezer.

Listen to a sample here.

“The incredibly talented pianist Roberta Rust interprets the work of Mozart here with an unparalleled amount of attention to detail, where every keystroke is carefully performed and absorbed with much intrigue…it makes for a Mozart experience you’re not going to hear anywhere else.” — Take Effect Reviews

“The Inside Story” MOZART MATURES interview is now live on PARMA blog. Here is the link.

“This marvelous recital disc by American pianist Roberta Rust covers the years 1782 to 1789…Rust has a good feel of this elegant music, and performs most persuasively…Rust’s approach to these works is one of total clarity and tonal coherence, shunning cheap tricks and sensational effects, all without diminishing the music’s impact…Heartily recommend.” — Chang Tou Liang, PIANOMANIA (Singapore)

“Rust plays these pieces with all the emotion and tenderness that you'd expect a lover of the source material to pour out. It's remarkable. It's obvious she knows each piece intimately, but she still manages to convey a freshness of one discovering the pieces for the first time.

It goes without saying, but lovers of classical music really do need to add this to their library. A wonderful collection of some of Mozart's most intriguing pieces.” — Review Graveyard (UK) 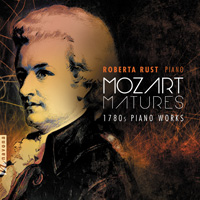 Roberta Rust was appointed for a two-year term to the Diversity, Equity, and Inclusion Committee (DEI) of the Music Teachers National Association (MTNA)

"The Inside Story" interview is now live on the PARMA blog. Here is the link. 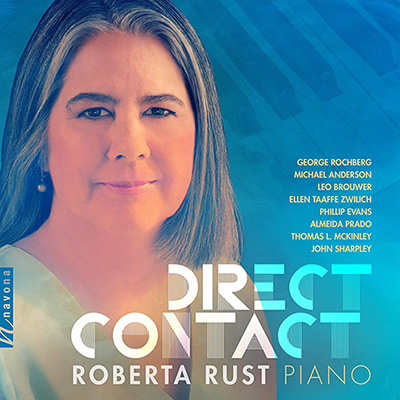 Listen to a sample track here.

“Rust is a virtuoso of the highest order and the best possible advocate for this music. She has masterly control of tone...her technical control in difficult passagework is clean, the direction of each phrase clear and always musical. This is a memorable program.” — American Record Guide

“The programming of the various pieces is excellent and she plays everything very well, providing a nice recital that is beautifully recorded (the piano sounds as if it’s right in your living room)” — The Art Music Lounge

“Rust’s own catholicity of taste is evident in her choice of these pieces...Rust plays everything on the CD with fine technique and obvious dedication” — Infodad

“The piano has the perfect presence and this further enhances her delicate performances of the lyrical music on this album. This is an excellent collection of pieces all well worth hearing and further exploring for anyone interested in accessible contemporary piano music.” — Cinemusical

“It's a diverse and entertaining release, which wonderfully showcases Rust's versatility at the piano.” — Review Graveyard